Finally Paul sets sail in what turns out to be a perilous voyage. As the storm rages on, Paul shows himself to be a calming force, speaking to his fellow shipmates of God’s promise to spare all their lives. What comfort we bring when we share the promises of God! 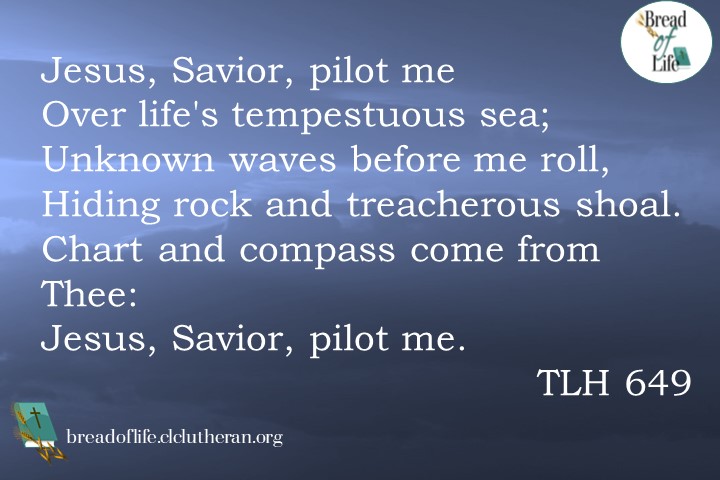 27:1 And when it was decided that we should sail for Italy, they delivered Paul and some other prisoners to a centurion of the Augustan Cohort named Julius. 2 And embarking in a ship of Adramyttium, which was about to sail to the ports along the coast of Asia, we put to sea, accompanied by Aristarchus, a Macedonian from Thessalonica. 3 The next day we put in at Sidon. And Julius treated Paul kindly and gave him leave to go to his friends and be cared for. 4 And putting out to sea from there we sailed under the lee of Cyprus, because the winds were against us. 5 And when we had sailed across the open sea along the coast of Cilicia and Pamphylia, we came to Myra in Lycia. 6 There the centurion found a ship of Alexandria sailing for Italy and put us on board. 7 We sailed slowly for a number of days and arrived with difficulty off Cnidus, and as the wind did not allow us to go farther, we sailed under the lee of Crete off Salmone. 8 Coasting along it with difficulty, we came to a place called Fair Havens, near which was the city of Lasea.

9 Since much time had passed, and the voyage was now dangerous because even the Fast1 was already over, Paul advised them, 10 saying, “Sirs, I perceive that the voyage will be with injury and much loss, not only of the cargo and the ship, but also of our lives.” 11 But the centurion paid more attention to the pilot and to the owner of the ship than to what Paul said. 12 And because the harbor was not suitable to spend the winter in, the majority decided to put out to sea from there, on the chance that somehow they could reach Phoenix, a harbor of Crete, facing both southwest and northwest, and spend the winter there.

The Storm at Sea

13 Now when the south wind blew gently, supposing that they had obtained their purpose, they weighed anchor and sailed along Crete, close to the shore. 14 But soon a tempestuous wind, called the northeaster, struck down from the land. 15 And when the ship was caught and could not face the wind, we gave way to it and were driven along. 16 Running under the lee of a small island called Cauda,2 we managed with difficulty to secure the ship’s boat. 17 After hoisting it up, they used supports to undergird the ship. Then, fearing that they would run aground on the Syrtis, they lowered the gear,3 and thus they were driven along. 18 Since we were violently storm-tossed, they began the next day to jettison the cargo. 19 And on the third day they threw the ship’s tackle overboard with their own hands. 20 When neither sun nor stars appeared for many days, and no small tempest lay on us, all hope of our being saved was at last abandoned.

21 Since they had been without food for a long time, Paul stood up among them and said, “Men, you should have listened to me and not have set sail from Crete and incurred this injury and loss. 22 Yet now I urge you to take heart, for there will be no loss of life among you, but only of the ship. 23 For this very night there stood before me an angel of the God to whom I belong and whom I worship, 24 and he said, ‘Do not be afraid, Paul; you must stand before Caesar. And behold, God has granted you all those who sail with you.’ 25 So take heart, men, for I have faith in God that it will be exactly as I have been told. 26 But we must run aground on some island.”


1 And when it was determined that we should sail into Italy, they delivered Paul and certain other prisoners unto one named Julius, a centurion of Augustus’ band. 2 And entering into a ship of Adramyttium, we launched, meaning to sail by the coasts of Asia; one Aristarchus, a Macedonian of Thessalonica, being with us. 3 And the next day we touched at Sidon. And Julius courteously entreated Paul, and gave him liberty to go unto his friends to refresh himself. 4 And when we had launched from thence, we sailed under Cyprus, because the winds were contrary. 5 And when we had sailed over the sea of Cilicia and Pamphylia, we came to Myra, a city of Lycia. 6 And there the centurion found a ship of Alexandria sailing into Italy; and he put us therein. 7 And when we had sailed slowly many days, and scarce were come over against Cnidus, the wind not suffering us, we sailed under Crete, over against Salmone; 8 And, hardly passing it, came unto a place which is called The fair havens; nigh whereunto was the city of Lasea. 9 Now when much time was spent, and when sailing was now dangerous, because the fast was now already past, Paul admonished them, 10 And said unto them, Sirs, I perceive that this voyage will be with hurt and much damage, not only of the lading and ship, but also of our lives. 11 Nevertheless the centurion believed the master and the owner of the ship, more than those things which were spoken by Paul.

12 And because the haven was not commodious to winter in, the more part advised to depart thence also, if by any means they might attain to Phenice, and there to winter; which is an haven of Crete, and lieth toward the south west and north west. 13 And when the south wind blew softly, supposing that they had obtained their purpose, loosing thence, they sailed close by Crete. 14 But not long after there arose against it a tempestuous wind, called Euroclydon. 15 And when the ship was caught, and could not bear up into the wind, we let her drive. 16 And running under a certain island which is called Clauda, we had much work to come by the boat: 17 Which when they had taken up, they used helps, undergirding the ship; and, fearing lest they should fall into the quicksands, struck sail, and so were driven. 18 And we being exceedingly tossed with a tempest, the next day they lightened the ship; 19 And the third day we cast out with our own hands the tackling of the ship. 20 And when neither sun nor stars in many days appeared, and no small tempest lay on us, all hope that we should be saved was then taken away.

21 But after long abstinence Paul stood forth in the midst of them, and said, Sirs, ye should have hearkened unto me, and not have loosed from Crete, and to have gained this harm and loss. 22 And now I exhort you to be of good cheer: for there shall be no loss of any man’s life among you, but of the ship. 23 For there stood by me this night the angel of God, whose I am, and whom I serve, 24 Saying, Fear not, Paul; thou must be brought before Caesar: and, lo, God hath given thee all them that sail with thee. 25 Wherefore, sirs, be of good cheer: for I believe God, that it shall be even as it was told me. 26 Howbeit we must be cast upon a certain island.(KJV)

2. As a mother stills her child,
Thou canst hush the ocean wild;
Boisterous waves obey Thy will
When Thou say’st to them, “Be still!”
Wondrous Sovereign of the sea,
Jesus, Savior, pilot me.

3. When at last I near the shore,
And the fearful breakers roar
‘Twixt me and the peaceful rest,
Then, while leaning on Thy breast,
May I hear Thee say to me,
“Fear not, I will pilot thee.”