Here we read of the Church’s first great doctrinal controversy, centering around the key question of how one is saved. Scripture’s answer? “We believe it is through the grace of our Lord Jesus that we are saved!” 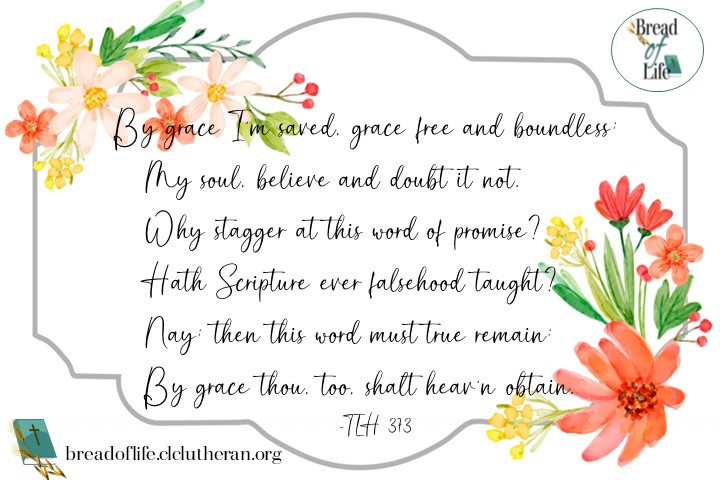 15:1 But some men came down from Judea and were teaching the brothers, “Unless you are circumcised according to the custom of Moses, you cannot be saved.” 2 And after Paul and Barnabas had no small dissension and debate with them, Paul and Barnabas and some of the others were appointed to go up to Jerusalem to the apostles and the elders about this question. 3 So, being sent on their way by the church, they passed through both Phoenicia and Samaria, describing in detail the conversion of the Gentiles, and brought great joy to all the brothers.1 4 When they came to Jerusalem, they were welcomed by the church and the apostles and the elders, and they declared all that God had done with them. 5 But some believers who belonged to the party of the Pharisees rose up and said, “It is necessary to circumcise them and to order them to keep the law of Moses.”

6 The apostles and the elders were gathered together to consider this matter. 7 And after there had been much debate, Peter stood up and said to them, “Brothers, you know that in the early days God made a choice among you, that by my mouth the Gentiles should hear the word of the gospel and believe. 8 And God, who knows the heart, bore witness to them, by giving them the Holy Spirit just as he did to us, 9 and he made no distinction between us and them, having cleansed their hearts by faith. 10 Now, therefore, why are you putting God to the test by placing a yoke on the neck of the disciples that neither our fathers nor we have been able to bear? 11 But we believe that we will be saved through the grace of the Lord Jesus, just as they will.”

12 And all the assembly fell silent, and they listened to Barnabas and Paul as they related what signs and wonders God had done through them among the Gentiles. 13 After they finished speaking, James replied, “Brothers, listen to me. 14 Simeon has related how God first visited the Gentiles, to take from them a people for his name. 15 And with this the words of the prophets agree, just as it is written,

16   “‘After this I will return,
and I will rebuild the tent of David that has fallen;
I will rebuild its ruins,
and I will restore it,
17   that the remnant2 of mankind may seek the Lord,
and all the Gentiles who are called by my name,
says the Lord, who makes these things 18 known from of old.’

19 Therefore my judgment is that we should not trouble those of the Gentiles who turn to God, 20 but should write to them to abstain from the things polluted by idols, and from sexual immorality, and from what has been strangled, and from blood. 21 For from ancient generations Moses has had in every city those who proclaim him, for he is read every Sabbath in the synagogues.”


1 And certain men which came down from Judaea taught the brethren, and said, Except ye be circumcised after the manner of Moses, ye cannot be saved. 2 When therefore Paul and Barnabas had no small dissension and disputation with them, they determined that Paul and Barnabas, and certain other of them, should go up to Jerusalem unto the apostles and elders about this question. 3 And being brought on their way by the church, they passed through Phenice and Samaria, declaring the conversion of the Gentiles: and they caused great joy unto all the brethren. 4 And when they were come to Jerusalem, they were received of the church, and of the apostles and elders, and they declared all things that God had done with them. 5 But there rose up certain of the sect of the Pharisees which believed, saying, That it was needful to circumcise them, and to command them to keep the law of Moses.

6 And the apostles and elders came together for to consider of this matter. 7 And when there had been much disputing, Peter rose up, and said unto them, Men and brethren, ye know how that a good while ago God made choice among us, that the Gentiles by my mouth should hear the word of the gospel, and believe. 8 And God, which knoweth the hearts, bare them witness, giving them the Holy Ghost, even as he did unto us; 9 And put no difference between us and them, purifying their hearts by faith. 10 Now therefore why tempt ye God, to put a yoke upon the neck of the disciples, which neither our fathers nor we were able to bear? 11 But we believe that through the grace of the Lord Jesus Christ we shall be saved, even as they. 12 Then all the multitude kept silence, and gave audience to Barnabas and Paul, declaring what miracles and wonders God had wrought among the Gentiles by them. 13 And after they had held their peace, James answered, saying, Men and brethren, hearken unto me: 14 Simeon hath declared how God at the first did visit the Gentiles, to take out of them a people for his name. 15 And to this agree the words of the prophets; as it is written, 16 After this I will return, and will build again the tabernacle of David, which is fallen down; and I will build again the ruins thereof, and I will set it up: 17 That the residue of men might seek after the Lord, and all the Gentiles, upon whom my name is called, saith the Lord, who doeth all these things. 18 Known unto God are all his works from the beginning of the world. 19 Wherefore my sentence is, that we trouble not them, which from among the Gentiles are turned to God: 20 But that we write unto them, that they abstain from pollutions of idols, and from fornication, and from things strangled, and from blood. 21 For Moses of old time hath in every city them that preach him, being read in the synagogues every sabbath day.(KJV)

1. By grace I’m saved, grace free and boundless;
My soul, believe and doubt it not.
Why stagger at this word of promise?
Hath Scripture ever falsehood taught?
Nay; then this word must true remain;
By grace thou, too, shalt heav’n obtain.

2. By grace! None dare lay claim to merit;
Our works and conduct have no worth.
God in His love sent our Redeemer,
Christ Jesus, to this sinful earth;
His death did for our sins atone,
And we are saved by grace alone.

3. By grace! Oh, mark this word of promise
When thou art by thy sins opprest,
When Satan plagues thy troubled conscience,
And when thy heart is seeking rest.
What reason cannot comprehend
God by His grace to thee doth send.

4. By grace God’s Son, our only Savior,
Came down to earth to bear our sin.
Was it because of thine own merit
That Jesus died thy soul to win?
Nay, it was grace, and grace alone,
That brought Him from His heavenly throne.

5. By grace! This ground of faith is certain;
So long as God is true, it stands.
What saints have penned by inspiration,
What in His Word our God commands,
What our whole faith must rest upon,
Is Grace alone, grace in His Son.

6. By grace to timid hearts that tremble,
In tribulation’s furnace tried,–
By grace, despite all fear and trouble,
The Father’s heart is open wide.
Where could I help and strength secure
If grace were not my anchor sure?