Stephen takes the Sanhedrin through a history lesson on God’s faithful love. For example, the Lord made good on all the great things He promised He would do for Abraham. 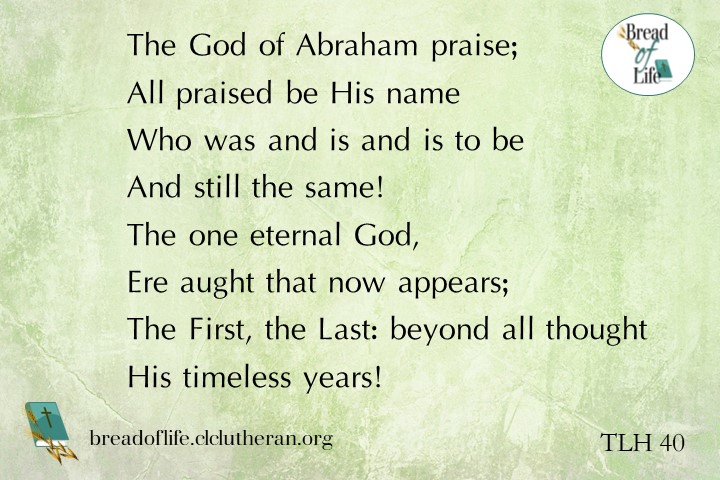 “Brothers and fathers, hear me. The God of glory appeared to our father Abraham when he was in Mesopotamia, before he lived in Haran, 3 and said to him, ‘Go out from your land and from your kindred and go into the land that I will show you.’ 4 Then he went out from the land of the Chaldeans and lived in Haran. And after his father died, God removed him from there into this land in which you are now living. 5 Yet he gave him no inheritance in it, not even a foot’s length, but promised to give it to him as a possession and to his offspring after him, though he had no child. 6 And God spoke to this effect—that his offspring would be sojourners in a land belonging to others, who would enslave them and afflict them four hundred years. 7 ‘But I will judge the nation that they serve,’ said God, ‘and after that they shall come out and worship me in this place.’ 8 And he gave him the covenant of circumcision. And so Abraham became the father of Isaac, and circumcised him on the eighth day, and Isaac became the father of Jacob, and Jacob of the twelve patriarchs.

9 “And the patriarchs, jealous of Joseph, sold him into Egypt; but God was with him 10 and rescued him out of all his afflictions and gave him favor and wisdom before Pharaoh, king of Egypt, who made him ruler over Egypt and over all his household. 11 Now there came a famine throughout all Egypt and Canaan, and great affliction, and our fathers could find no food. 12 But when Jacob heard that there was grain in Egypt, he sent out our fathers on their first visit. 13 And on the second visit Joseph made himself known to his brothers, and Joseph’s family became known to Pharaoh. 14 And Joseph sent and summoned Jacob his father and all his kindred, seventy-five persons in all. 15 And Jacob went down into Egypt, and he died, he and our fathers, 16 and they were carried back to Shechem and laid in the tomb that Abraham had bought for a sum of silver from the sons of Hamor in Shechem.

17 “But as the time of the promise drew near, which God had granted to Abraham, the people increased and multiplied in Egypt 18 until there arose over Egypt another king who did not know Joseph. 19 He dealt shrewdly with our race and forced our fathers to expose their infants, so that they would not be kept alive.


1 Then said the high priest, Are these things so? 2 And he said, Men, brethren, and fathers, hearken; The God of glory appeared unto our father Abraham, when he was in Mesopotamia, before he dwelt in Charran, 3 And said unto him, Get thee out of thy country, and from thy kindred, and come into the land which I shall shew thee. 4 Then came he out of the land of the Chaldaeans, and dwelt in Charran: and from thence, when his father was dead, he removed him into this land, wherein ye now dwell. 5 And he gave him none inheritance in it, no, not so much as to set his foot on: yet he promised that he would give it to him for a possession, and to his seed after him, when as yet he had no child. 6 And God spake on this wise, That his seed should sojourn in a strange land; and that they should bring them into bondage, and entreat them evil four hundred years. 7 And the nation to whom they shall be in bondage will I judge, said God: and after that shall they come forth, and serve me in this place. 8 And he gave him the covenant of circumcision: and so Abraham begat Isaac, and circumcised him the eighth day; and Isaac begat Jacob; and Jacob begat the twelve patriarchs. 9 And the patriarchs, moved with envy, sold Joseph into Egypt: but God was with him, 10 And delivered him out of all his afflictions, and gave him favour and wisdom in the sight of Pharaoh king of Egypt; and he made him governor over Egypt and all his house. 11 Now there came a dearth over all the land of Egypt and Chanaan, and great affliction: and our fathers found no sustenance. 12 But when Jacob heard that there was corn in Egypt, he sent out our fathers first. 13 And at the second time Joseph was made known to his brethren; and Joseph’s kindred was made known unto Pharaoh. 14 Then sent Joseph, and called his father Jacob to him, and all his kindred, threescore and fifteen souls. 15 So Jacob went down into Egypt, and died, he, and our fathers, 16 And were carried over into Sychem, and laid in the sepulchre that Abraham bought for a sum of money of the sons of Emmor the father of Sychem.

17 But when the time of the promise drew nigh, which God had sworn to Abraham, the people grew and multiplied in Egypt, 18 Till another king arose, which knew not Joseph. 19 The same dealt subtly with our kindred, and evil entreated our fathers, so that they cast out their young children, to the end they might not live.(KJV)

1. The God of Abraham praise;
All praised be His name
Who was and is and is to be
And still the same!
The one eternal God,
Ere aught that now appears;
The First, the Last: beyond all thought
His timeless years!

2. The God of Abraham praise,
At whose supreme command
From earth I rise and seek the joys
At His right hand.
I all on earth forsake,
Its wisdom, fame, and power,
And Him my only Portion make,
My Shield and Tower.

3. He by Himself hath sworn,–
I on His oath depend,–
I shall, on eagles’ wings upborne,
To heaven ascend;
I shall behold His face,
I shall His power adore
And sing the wonders of His grace
Forevermore.

4. The whole triumphant host
Give thanks to God on high;
“Hail, Father, Son, and Holy Ghost!”
They ever cry.
Hail, Abraham’s God and mine!–
I join the heavenly lays,–
All might and majesty are Thine,
And endless praise.