The Church devotes itself 1) to baptizing 2) to teaching the Word 3) to prayer 4) to showing Christ-like love to one another 5) to celebrating the Lord’s Supper (“the breaking of bread”) and 6) to praising God (spreading the Gospel). 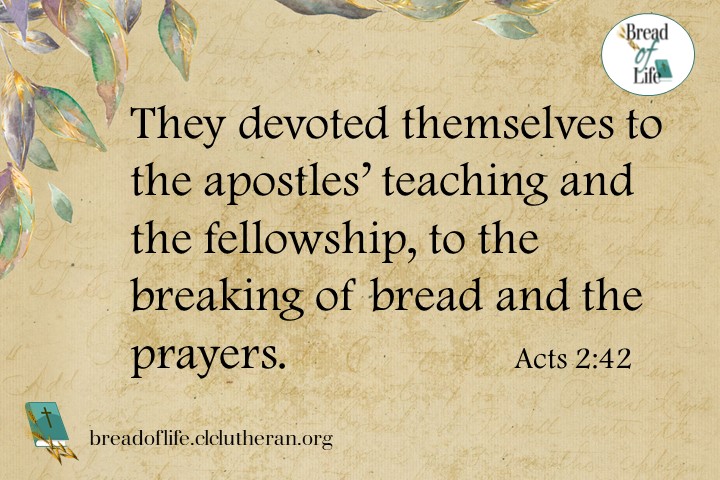 41 So those who received his word were baptized, and there were added that day about three thousand souls.

The Fellowship of the Believers

42 And they devoted themselves to the apostles’ teaching and the fellowship, to the breaking of bread and the prayers. 43 And awe1 came upon every soul, and many wonders and signs were being done through the apostles. 44 And all who believed were together and had all things in common. 45 And they were selling their possessions and belongings and distributing the proceeds to all, as any had need. 46 And day by day, attending the temple together and breaking bread in their homes, they received their food with glad and generous hearts, 47 praising God and having favor with all the people. And the Lord added to their number day by day those who were being saved.


41 Then they that gladly received his word were baptized: and the same day there were added unto them about three thousand souls.

42 And they continued stedfastly in the apostles’ doctrine and fellowship, and in breaking of bread, and in prayers. 43 And fear came upon every soul: and many wonders and signs were done by the apostles. 44 And all that believed were together, and had all things common; 45 And sold their possessions and goods, and parted them to all men, as every man had need. 46 And they, continuing daily with one accord in the temple, and breaking bread from house to house, did eat their meat with gladness and singleness of heart, 47 Praising God, and having favour with all the people. And the Lord added to the church daily such as should be saved.(KJV)