Before ascending into Heaven, Jesus promised to give His disciples the Holy Spirit so that they would be empowered to bring Christ’s saving truth to the ends of the earth! 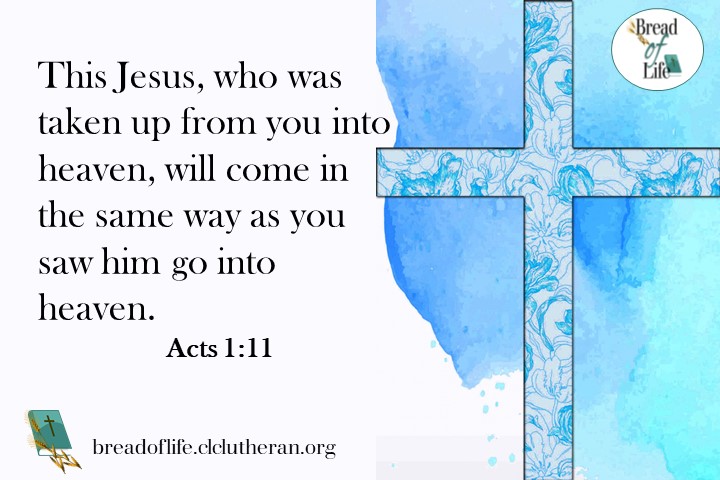 The Promise of the Holy Spirit

1:1 In the first book, O Theophilus, I have dealt with all that Jesus began to do and teach, 2 until the day when he was taken up, after he had given commands through the Holy Spirit to the apostles whom he had chosen. 3 He presented himself alive to them after his suffering by many proofs, appearing to them during forty days and speaking about the kingdom of God.

4 And while staying1 with them he ordered them not to depart from Jerusalem, but to wait for the promise of the Father, which, he said, “you heard from me; 5 for John baptized with water, but you will be baptized with2 the Holy Spirit not many days from now.”

6 So when they had come together, they asked him, “Lord, will you at this time restore the kingdom to Israel?” 7 He said to them, “It is not for you to know times or seasons that the Father has fixed by his own authority. 8 But you will receive power when the Holy Spirit has come upon you, and you will be my witnesses in Jerusalem and in all Judea and Samaria, and to the end of the earth.” 9 And when he had said these things, as they were looking on, he was lifted up, and a cloud took him out of their sight. 10 And while they were gazing into heaven as he went, behold, two men stood by them in white robes, 11 and said, “Men of Galilee, why do you stand looking into heaven? This Jesus, who was taken up from you into heaven, will come in the same way as you saw him go into heaven.”


1 The former treatise have I made, O Theophilus, of all that Jesus began both to do and teach, 2 Until the day in which he was taken up, after that he through the Holy Ghost had given commandments unto the apostles whom he had chosen: 3 To whom also he shewed himself alive after his passion by many infallible proofs, being seen of them forty days, and speaking of the things pertaining to the kingdom of God: 4 And, being assembled together with them, commanded them that they should not depart from Jerusalem, but wait for the promise of the Father, which, saith he, ye have heard of me. 5 For John truly baptized with water; but ye shall be baptized with the Holy Ghost not many days hence.

6 When they therefore were come together, they asked of him, saying, Lord, wilt thou at this time restore again the kingdom to Israel? 7 And he said unto them, It is not for you to know the times or the seasons, which the Father hath put in his own power. 8 But ye shall receive power, after that the Holy Ghost is come upon you: and ye shall be witnesses unto me both in Jerusalem, and in all Judaea, and in Samaria, and unto the uttermost part of the earth. 9 And when he had spoken these things, while they beheld, he was taken up; and a cloud received him out of their sight. 10 And while they looked stedfastly toward heaven as he went up, behold, two men stood by them in white apparel; 11 Which also said, Ye men of Galilee, why stand ye gazing up into heaven? this same Jesus, which is taken up from you into heaven, shall so come in like manner as ye have seen him go into heaven.(KJV)