“It was necessary for the Christ to suffer and to rise from the dead the third day, and that repentance and remission of sins should be preached in His name to all nations.” 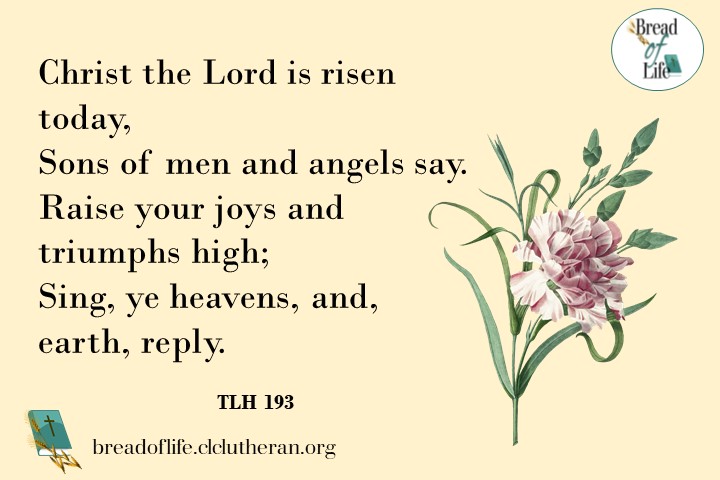 Jesus Appears to His Disciples

36 As they were talking about these things, Jesus himself stood among them, and said to them, “Peace to you!” 37 But they were startled and frightened and thought they saw a spirit. 38 And he said to them, “Why are you troubled, and why do doubts arise in your hearts? 39 See my hands and my feet, that it is I myself. Touch me, and see. For a spirit does not have flesh and bones as you see that I have.” 40 And when he had said this, he showed them his hands and his feet. 41 And while they still disbelieved for joy and were marveling, he said to them, “Have you anything here to eat?” 42 They gave him a piece of broiled fish,1 43 and he took it and ate before them.

44 Then he said to them, “These are my words that I spoke to you while I was still with you, that everything written about me in the Law of Moses and the Prophets and the Psalms must be fulfilled.” 45 Then he opened their minds to understand the Scriptures, 46 and said to them, “Thus it is written, that the Christ should suffer and on the third day rise from the dead, 47 and that repentance for2 the forgiveness of sins should be proclaimed in his name to all nations, beginning from Jerusalem. 48 You are witnesses of these things. 49 And behold, I am sending the promise of my Father upon you. But stay in the city until you are clothed with power from on high.”

50 And he led them out as far as Bethany, and lifting up his hands he blessed them. 51 While he blessed them, he parted from them and was carried up into heaven. 52 And they worshiped him and returned to Jerusalem with great joy, 53 and were continually in the temple blessing God.


36 And as they thus spake, Jesus himself stood in the midst of them, and saith unto them, Peace be unto you. 37 But they were terrified and affrighted, and supposed that they had seen a spirit. 38 And he said unto them, Why are ye troubled? and why do thoughts arise in your hearts? 39 Behold my hands and my feet, that it is I myself: handle me, and see; for a spirit hath not flesh and bones, as ye see me have. 40 And when he had thus spoken, he shewed them his hands and his feet. 41 And while they yet believed not for joy, and wondered, he said unto them, Have ye here any meat? 42 And they gave him a piece of a broiled fish, and of an honeycomb. 43 And he took it, and did eat before them. 44 And he said unto them, These are the words which I spake unto you, while I was yet with you, that all things must be fulfilled, which were written in the law of Moses, and in the prophets, and in the psalms, concerning me. 45 Then opened he their understanding, that they might understand the scriptures, 46 And said unto them, Thus it is written, and thus it behoved Christ to suffer, and to rise from the dead the third day: 47 And that repentance and remission of sins should be preached in his name among all nations, beginning at Jerusalem. 48 And ye are witnesses of these things. 49 And, behold, I send the promise of my Father upon you: but tarry ye in the city of Jerusalem, until ye be endued with power from on high.

50 And he led them out as far as to Bethany, and he lifted up his hands, and blessed them. 51 And it came to pass, while he blessed them, he was parted from them, and carried up into heaven. 52 And they worshipped him, and returned to Jerusalem with great joy: 53 And were continually in the temple, praising and blessing God. Amen.(KJV)

2. Love’s redeeming work is done,
Fought the fight, the battle won.
Lo, our Sun’s eclipse is o’er;
Lo, He sets in blood no more.

3. Vain the stone, the watch, the seal;
Christ has burst the gates of hell.
Death in vain forbids His rise;
Christ has opened Paradise.

4. Lives again our glorious King;
Where, O Death, is now thy sting?
Once He died our souls to save;
Where thy victory, O Grave?

5. Soar we now where Christ has led,
Following our exalted Head.
Made like Him, like Him we rise;
Ours the cross, the grave, the skies.

6. Hail the Lord of earth and heaven!
Praise to Thee by both be given!
Thee we greet triumphant now:
Hail, the Resurrection Thou!