“Remember how He spoke to you when He was still in Galilee, saying, ‘The Son of Man must be delivered into the hands of sinful men, and be crucified, and the third day rise again.’ ” 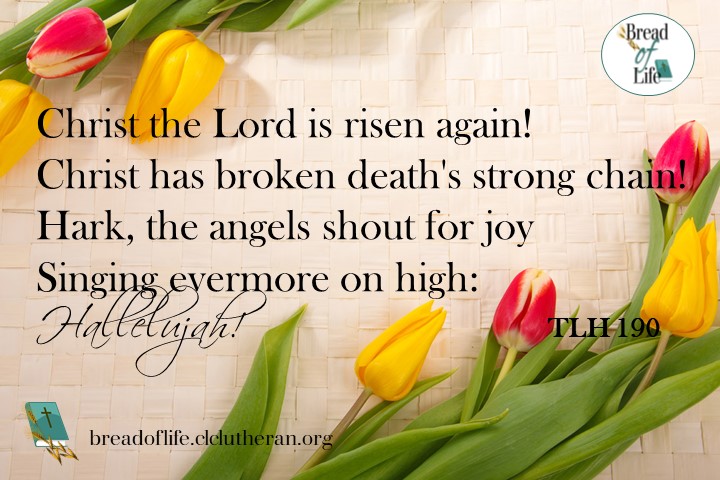 24:1 But on the first day of the week, at early dawn, they went to the tomb, taking the spices they had prepared. 2 And they found the stone rolled away from the tomb, 3 but when they went in they did not find the body of the Lord Jesus. 4 While they were perplexed about this, behold, two men stood by them in dazzling apparel. 5 And as they were frightened and bowed their faces to the ground, the men said to them, “Why do you seek the living among the dead? 6 He is not here, but has risen. Remember how he told you, while he was still in Galilee, 7 that the Son of Man must be delivered into the hands of sinful men and be crucified and on the third day rise.” 8 And they remembered his words, 9 and returning from the tomb they told all these things to the eleven and to all the rest. 10 Now it was Mary Magdalene and Joanna and Mary the mother of James and the other women with them who told these things to the apostles, 11 but these words seemed to them an idle tale, and they did not believe them. 12 But Peter rose and ran to the tomb; stooping and looking in, he saw the linen cloths by themselves; and he went home marveling at what had happened.


1 Now upon the first day of the week, very early in the morning, they came unto the sepulchre, bringing the spices which they had prepared, and certain others with them. 2 And they found the stone rolled away from the sepulchre. 3 And they entered in, and found not the body of the Lord Jesus. 4 And it came to pass, as they were much perplexed thereabout, behold, two men stood by them in shining garments: 5 And as they were afraid, and bowed down their faces to the earth, they said unto them, Why seek ye the living among the dead? 6 He is not here, but is risen: remember how he spake unto you when he was yet in Galilee, 7 Saying, The Son of man must be delivered into the hands of sinful men, and be crucified, and the third day rise again. 8 And they remembered his words, 9 And returned from the sepulchre, and told all these things unto the eleven, and to all the rest. 10 It was Mary Magdalene, and Joanna, and Mary the mother of James, and other women that were with them, which told these things unto the apostles. 11 And their words seemed to them as idle tales, and they believed them not. 12 Then arose Peter, and ran unto the sepulchre; and stooping down, he beheld the linen clothes laid by themselves, and departed, wondering in himself at that which was come to pass.(KJV)

2. He who gave for us His life.
Who for us endured the strife,
Is our Paschal Lamb today.
We, too, sing for joy and say:
Hallelujah!

3. He who bore all pain and loss
Comfortless upon the cross
Lives in glory now on high,
Pleads for us and hears our cry:
Hallelujah!

4. He whose path no records tell
Hath descended into hell;
He the strong man armed hath bound
And in highest heaven is crowned.
Hallelujah!

5. He who slumbered in the grave
Is exalted now to save;
Now through Christendom it rings
That the Lamb is King of kings.
Hallelujah!

6. Now He bids us tell abroad
How the lost may be restored,
How the penitent forgiven,
How we, too, may enter heaven.
Hallelujah!

7. Thou our Paschal Lamb indeed,
Christ, today Thy people feed;
Take our sins and guilt away
That we all may sing for aye:
Hallelujah!